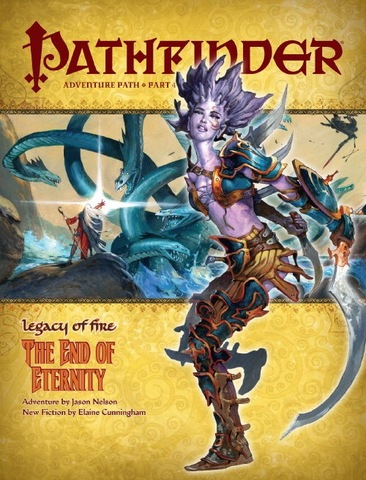 Hidden amid the tattered parchment and mundane ink of a mysterious map hides the fabulous paradise of Kakishon. A realm of mystical wonders, mythical beasts, and legendary treasures, this long-lost creation of one of historys greatest wizards once again inspires the bold to seek its wonders. Yet time, ancient magic, and bitter rivalries work to corrupt the incredible realm, turning it into both paradise and prison. Can they tame the powers of Kakishons magical islands and best the masters of the wondrous land? Or will they forever be prisoners of paradise? This Pathfinder Adventure Path volume includes: "The End of Eternity," an adventure for 9th-level characters, by Jason Nelson, A glimpse into the Maelstrom and the lives of its enigmatic natives, the proteans, lords of primeval chaos, by Todd Stewart, The magical rites of Sulesh the Great, master of seals and binder of genies, as transcribed by Wolfgang Baur and James Jacobs, Pathfinder Channa Ti faces danger on the River Asp in the Pathfinders Journal, by New York Times bestselling author Elaine Cunningham, Six new monsters by Adam Daigle, James Jacobs, Jason Nelson, F. Wesley Schneider, and Todd Stewart. For characters of 9th to 11th level.